Home » telephony » VoIP vs. SIP: What’s the Difference and Which is Best?

VoIP vs. SIP: What’s the Difference and Which is Best? 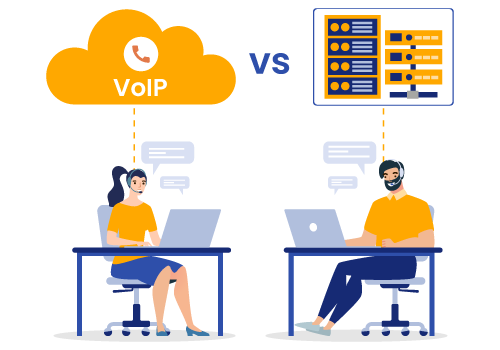 “There was a time when people felt the internet was another world, but now people realize it’s a tool that we use in this world.”- Tim Berners Lee.

Understanding Tim Berners Lee’s words, it becomes slightly more comfortable to fathom how far we have come in the internet race. What seems like a mundane task that can be done with a few clicks on our smartphone was once a dream of the old era.

Making calls over the internet via WhatsApp, Skype or Hangouts seems like a very straightforward and convenient task. But roll the clock back a decade, and these things were mostly a luxury tool needing costly internet plans and full-fledged internet lines and connections.

One of the things that are being taught heavily to students nowadays is VoIP or Voice Over Internet Protocol. To the uninitiated, this is the same protocol that helps you to place calls over the internet. So in a crux, no VoIP, no call over the internet.

VoIP system works because it sends the voice signals as packets instead of continuous signals like in traditional phone lines. However, VoIP comes to another more powerful protocol but mostly undervalued, SIP or the Session Initiation Protocol.

A SIP work revolves around the initiation, maintenance, and termination of communication sessions in VoIP. Instead of just concerning itself with voice, the SIP VoIP also governs the transfer of video and messaging applications.

Now, the question might arise that if SIP encompasses VoIP functionality, that protocol might be the better one to deploy for your business needs. But hold your horses. That is not always the case. Not all SIP providers cover VoIP, and not all VoIP providers give VoIP embedded with a SIP protocol.

In some cases, mostly business VoIP, the VoIP protocol functions as the more significant element and includes SIP under its purview. This means that VoIP automatically comes with the functionality to increase its dominion from just voice calling to arranging the transfer of video, text, and other multimedia.

7 Clear Differences Between VoIP and SIP

To decide which one you should get, here are the differences between VoIP and SIP.

Now that you know the differences between the two, it’s time to see each of the two’s benefits and pitfalls. Just like there are two sides to a coin, each protocol has pros and cons, whether it’s a SIP or a VoIP Phone.

Like we said, each has its pros and cons. However, upon detailed observations and taking into account the need of the hour, SIP comes out on top as the better one. Here’s why:

With these kinds of benefits in place, it is pretty easy to remark that the Session Initiation Protocol or SIP is the one to be picked up. Especially if you are a working professional, so now that you have the clarity about which one is the best one, make sure you take a dynamic and in-depth approach before picking one up.

Did we miss any critical differences between SIP and VoIP? You share your knowledge with us or correct us in the comments below.