What Is VoIP Phone System and How its work – CallHippo

As the world is getting more digitized with the advent of internet & newer technologies, an increasing number of business enterprises are leveraging this change by cutting costs and making the shift from the traditional phone systems to more advanced Voice over Internet Protocol (VoIP) phone systems.

If you’re also looking to make a decision to change your business phone system to VoIP, this article by CallHippo explains everything that you need to know about what is VoIP, How it works, and the terminology of VoIP phone system.

Historically speaking, VoIP was referred to as the use of IP to connect private branch exchanges (PBXs). However, the term is now interchangeably used with the IP telephony system. This revolutionizing technology to make and receive calls has been in the mainstream and still going strong for almost 10 years now.

The VoIP phone system allows you to make voice calls using a broadband Internet connection instead of a regular (or analog) telephone line.

What does it include?

The requirement for a VoIP phone system services to work is a high-speed internet connection (DSL, Cable) or wireless, as long as the bandwidth of the wireless provider meets the minimum requirement criterion for the VoIP provider you choose.

How does VoIP Phone System work?

This allows your calls to be received by both the traditional telephones worldwide as well as by other VoIP users. 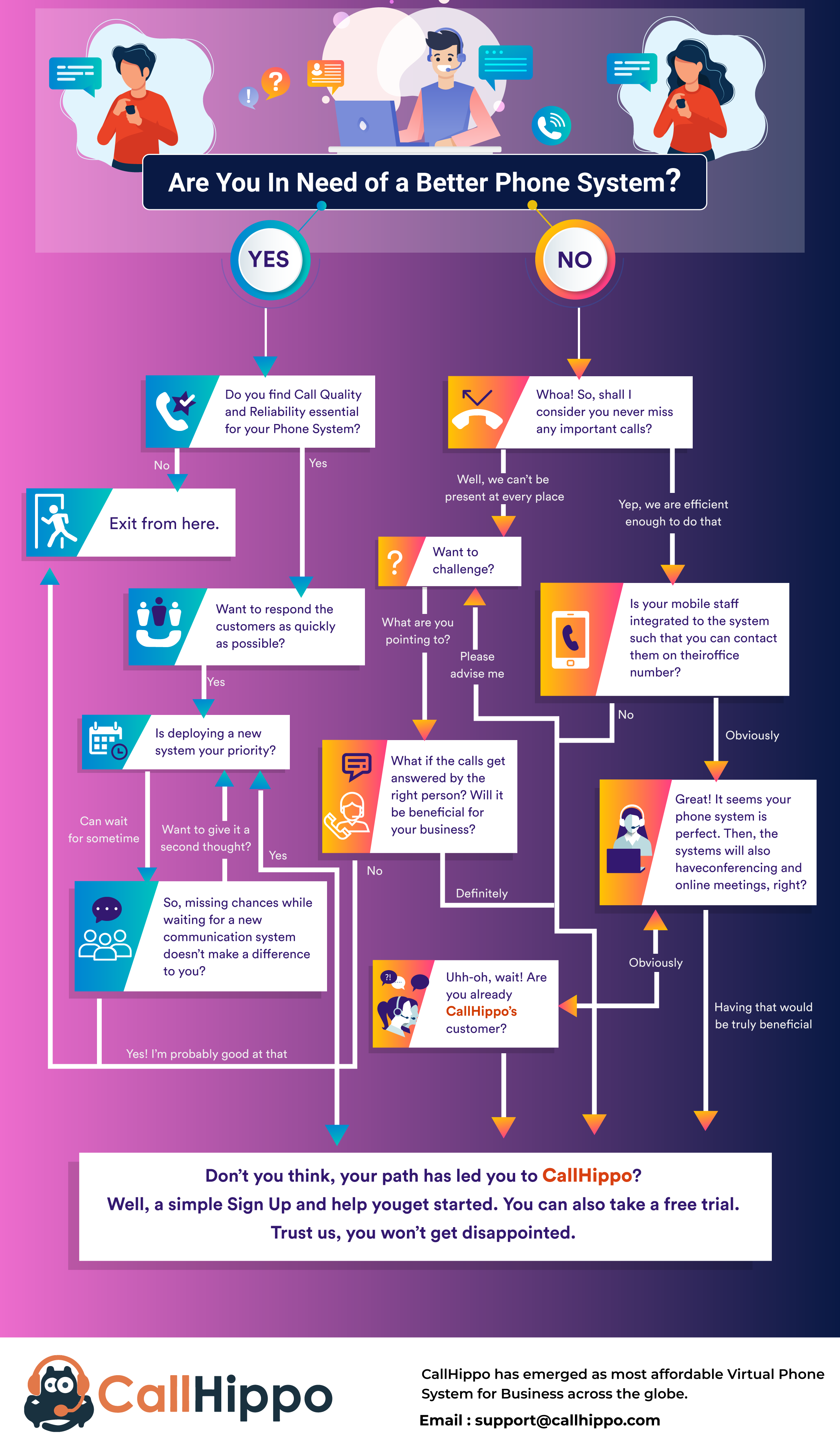 Among the main benefits of VoIP phone system include-

Most of the VoIP phone systems come with the following features in their business plans:

Apart from the above, some of the additional features offered by the best VoIP phone service and virtual number providers such as CallHippo include-

An excellent feature to have in any mobile number for business, it reduces the hassle that comes with keeping the old/established number in case of a move or changing phone numbers completely.

Since the VoIP phone numbers aren’t attached to the traditional phone lines and destinations, they can be easily moved in case you’re relocating your business.

This is yet another exciting feature of the VoIP phone system. It allows users to choose a phone number with any area code because of the fact that VoIP numbers aren’t attached to any specific location.

For example:  If your business is based out of location A, and you shift most of your over-the-phone business to location B, you could still carry on your business functions smoothly by assigning yourself a phone number of location B area code and all your business calls would be charged as local, without any long-distance charges.

The beauty of the VoIP phone system is that it allows you to make all the VoIP calls from multiple devices including IP phones, computers, mobiles, tablets, etc. Additionally, all your incoming VoIP calls can be easily set to ring multiple devices simultaneously irrespective of the location of the device or executives handling the same.

For most of the top VoIP service providers, the prices of the plans range anywhere from $20 a month per line (basic plans) to $50 per month per line (feature-rich plans). You need to ask the provider about the cost involved in VoIP phones.

Irrespective of your choice of the service provider, VoIP phone systems are usually less expensive to install and maintain. This is because they operate on the internet and allow employees to use their existing phones, laptops, etc. with the VoIP system, an easy alternative than traditional telephone systems don’t provide.

To Sum it Up

Being an extremely flexible solution; the best VoIP phone service lets you choose the package that perfectly suits your customized business needs. It means that you will be able to use the VoIP telephony system wherever you are as long as you have a fast Internet connection.

Why wait any longer? Sign up now with CallHippo and get started in less than 3 minutes.

What is a Business Phone System: Why Your Small Business Needs It In 2021?

How Does Call Center Software Work?