What is an ACD Phone System?

What is An ACD Phone System?

Simply put, the ACD phone system is used to manage incoming calls in an office or a call center. They distribute or divert incoming calls to the concerned agents or groups. The main function of ACD is to route and direct incoming calls.

Sometimes, ACD Phone System is confused with the IVR software. It is important to note that IVR is also a part of the ACD system. Thus, IVR is integrated in the ACD Phone system. The two are not different systems competing against one another.

It will allow you to route the call in a fixed order. Now the order depends on the different responses given on the IVR (Interactive Voice Response) such as giving priority to a VIP customer, directing the call to the technical team for technical queries or sales team for sales related queries and so on. The same order will be followed every time a call is received and based on that it will be transferred to the next executive in case the very first executive is busy.

In this feature, the call will be routed to every member of the team and whoever is free will be able to respond. It makes the response time quick and helps customer satisfaction.

Based on the talk time of the executive

The time taken by the executive to finish the call is the base of this mechanism. Here we can have three different scenarios:

Here you can fix and automate the incoming call to different executives. In case the executive is busy, the call will remain on hold for some time and then it will route to another executive. The same procedure will happen until an executive answers the call. The time of hold will be predefined and fixed for every executive.

What is the role of the ACD Phone system in call center?

An effective ACD system can do a lot for your business. The primary objective of any business aligns with that of the ACD system – customer satisfaction. All businesses aim to please their customers and the ACD Software aims to help businesses in this endeavour.

Let us see how.

1. It can attend to hundreds of calls at once 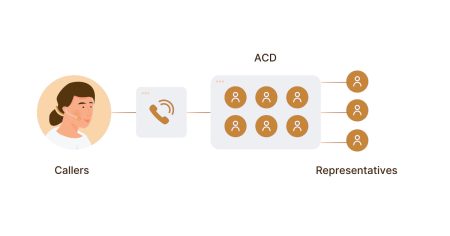 Businesses generally hire a receptionist to answer incoming calls and then route them to the correct agent. However, there may be hundreds, if not thousands of calls rolling in during the peak business hours. What do you do then? One cannot possibly employ a hundred receptionists to deal with such a situation!

This is where the ACD phone systems comes in. The system has the potential to answer N number of calls at the same time. Gone are the days of keeping customers on hold for hours before their calls are attended to.

2. Calls never get transferred to the wrong agent

Think about how many times your receptionist has transferred a call to the wrong agent. Getting his call transferred repeatedly certainly does not make the customer happy.

The ACD program provides a solution to this problem as well. This system will ensure that calls never get transferred to the wrong agent again. And why is this? It’s because mistakes are made by humans, not machines! The system will simply follow the algorithm that you feed in and transfer calls according to that. Here is an article to learn all about call transfer. 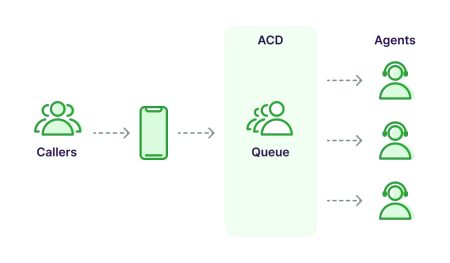 The ACD telephone system may employ various methods to efficiently distribute calls among all the agents. It may route the first call to the first agent, the second call to the second agent, and so on. The purpose of this type of distribution is to ensure that calls get evenly distributed among agents.

In another method of distribution, during an incoming call, the ACD will ring all the agents at once. Whichever agent is free to answer the call may pick up the phone. Once somebody answers, it stops ringing.

The user may feed in a routing order to the ACD system based on the skills of his agents. The system will then transfer the calls according to that list.

Different methods are suitable for different types of businesses. In some offices, it so happens that only a handful of agents actually work while the others slack off for most part of the day. Efficient call distribution methods prevents such a scenario and ensures that all agents work equally, thereby increasing the quality of work done.

These were just a few of the merits of having an ACD phone system in your call center. It can really enhance the productivity and efficiency levels in your office and make your everyday life much easier.

What are the main features of the ACD Phone system?

Let us have a look at some of the features of the ACD system that makes it so useful in offices or call centers.

Different callers have different queries and need different experts to tend to their questions. It is frustrating for the caller to repeat his problem to different agents in a call center till he is transferred to the right agent.

To save the caller from this hassle, the ACD system gives the caller a list of departments to choose from right at the beginning of the call. Depending on his query, the caller can choose the department and get routed accordingly.

For example, the ACD telephone system may give the user a variety of choices like the technical department, the sales department, customer service, and so on.

This feature is extremely useful for call centers dealing with huge volumes of calls. During the peak hours of business, customers sometimes have to wait for literally hours before their call is connected to an agent. Stressful, right?

The ACD system also has an option of prioritising some calls. Callers with an urgent requirement are given a higher priority than the callers with a simple inquiry. Premium callers are also given priority. The system will recognise their number and automatically place them at the front of the queue.

This feature is especially useful for call centers facing huge call volumes. It helps them distribute their call load by dividing them into multiple queues.

The ACD telephone system can seamlessly integrate with third party systems like CTI and IVR. With the CTI system, the agents can get the caller details displayed on his screen before making a call. This helps the agents have a more personalised conversation with the caller.

The IVR software is used to greet the caller and keep the caller entertained when he is put on hold. It acts as your virtual receptionist.

With the help of the ACD Phone system calls can be transferred to different agents sitting in various locations. The agents do not need to be present at the same place or geographical location.

This enables call centers to hire the best agents across all geographical locations. Agents in different locations can function as a single team or unit.

The ACD program has access to a lot of data. This data can be collected and analysed to identify problems and make necessary changes.

The number of incoming and outgoing calls, the on-call times of all the agents, the strength of various call queues, the number of missed calls, and so on can be calculated and analysed.

Such data can be used to determine whether or not the agents are working sufficiently, which times of the day are the busiest, which department gets the most number of calls, etc.

This facilitates the management to identify the various problem areas in the call center and bring about necessary and positive changes in the office.

If the call center gets any calls after work hours, the ACD takes the call straight to voicemail. Also, if all the agents are busy and the caller does not wish to wait, then he can choose to leave his message on voicemail.

There are various other features of the ACD Phone systems that make it a must-have for every call center. For any call center that is struggling to deal with the call load or is looking to expand efficiently, ACD is definitely the go-to software.