Home » How Does VoIP Work

How Does VoIP Works?

The Concept Of VoIP

To put in simple terms, VoIP stands for Voice over Internet Protocol. A set of technologies engineered to transmit voice communication over digital networks or the internet. As the internet is prevalent, therefore, VoIP is the smartest way of placing and receiving calls compared to the traditional telephony system.

VoIP saves you from the hassle of the traditional circuit transmissions of the PSTN. It converts the voice data into packets using IP and delivers via the internet. What makes it popular is, its affordability and seamless connectivity. The user doesn’t incur any surcharge beyond what he is paying for internet access. 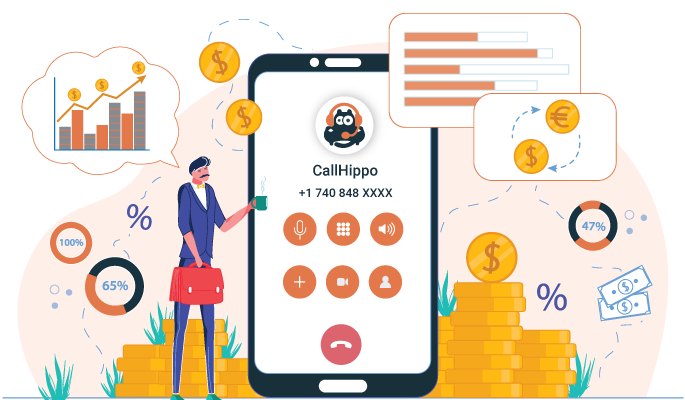 Why Do Businesses Need VoIP?

You can leverage the already existing internet service to create a robust business phone system for your enterprise.

Not only that, but entailing VoIP will provide you and your employees flexibility. They can make calls from their business or VoIP phone numbers via desktop, phones, office landlines, or laptops.

You can also unify numerous communication protocols like video conferencing, text messaging, etc. on a single platform. It means that you don’t have to integrate various tools or pay different vendors for it.

Set up your business phone system in a breeze

How Does VoIP Works For Business?

VoIP has played an essential role in revolutionizing the way of communication. The wide range of capabilities provided by the VoIP system has significantly benefited the commercial and industrial sectors. In layman’s terms, we can say that VoIP is taking an audio signal and converting it into digital data for long-distance transmission over the internet. Let’s dive more in-depth to know how VoIP works

It is the primary and crucial step for VoIP operation. With the help of an algorithm, VoIP converts the audio signal into digital data or packets in the transmission end and traverses it over the internet. These packets are converted back to the original audio signal at the receiver’s end. Codecs vary in sound quality based on different factors. It could be available bandwidth, computational requirements, and many more. Various platforms, services, phones, and other elements have different codecs. When two phones communicate, they negotiate as to which codec is suitable for seamless communication.

Packet switching optimizes VoIP communication. It mitigates silent intervals during transmission. The network sends and receives the information/data only when it’s needed. The data packets are tagged with addresses that indicate the destination. Inside the packet, there is a file or information that has to be transmitted. Once sent in the digital network, it travels through various connections until it reaches the desired computer or mobile. VoIP system is inexpensive compared to the traditional phone system because the data gets coded and decoded easily. These codes/packets can travel longer distances and only gets decoded once it reaches the destination. It enables the computer to perform different tasks while the packet is being transmitted, thereby saving your time.

With ATA, you can connect its one end to your telephone and the other end to your modem. It converts the audio signal into packets and transfers it over the internet until it reaches the desired receiver. It is the easiest and simplest way to communicate over VoIP. You can connect your old phone and ethernet cable with ATA. After the connection, power it to engage with the voice calls over the internet.

Basically, it is an application or software that you can download on your computer to make the calls. It is a backup calling platform that uses the same line as that of your desktop phone. The best part about it is that it’s not limited to your PCs or laptops, but you can also install it on your smartphones. The reason behind its popularity is that it leverages the existing features of the platform like in-built microphone, web-enabled camera, and many more to place the calls.

The third way is using an IP phone. It is specially engineered for VoIP. Instead of using traditional connectors, this platform uses ethernet connectors for dialing and receiving the call. There are two types of IP phones available in the market. One that connects to your modem or router and second that wirelessly connects to the network. It uses internet connectivity to give a detailed insight into every phone call placed or received.

VoIP is rising to immense popularity because of its ease of usage and seamless connectivity. You can set up the VoIP system in hardly four to five minutes, and also, it doesn’t require any technical skills to operate. If you are looking to streamline your communication, then adapting to VoIP is the smartest decision you could take.