You can buy a Canada virtual phone number in less than 3 minutes from anywhere in the world. When you make outgoing calls, your virtual number of Canada will be displayed to your customers thus ensuring that you’re able to strengthen your brand’s reach in the country. Sign up now!

What is Virtual Phone Number of Canada?

Canada virtual phone numbers are an alternative to physical numbers of Canada. These numbers can be purchased from various service providers across the globe, such as CallHippo.

These are local numbers hosted on the cloud. Hence they can be operated through a smart device and decent internet access globally, unlike traditional phone numbers where you need a physical line or a sim card.

What is The Format Of Phone Numbers in Canada?

Virtual number of Canada follows a fixed-length Bell System format. It comprises of the following:

For instance, Canada’s phone numbers can be represented by +1 ABC NXX XXXX, where +1 is the country code. For making local calls from a Canada virtual landline, you can dial without adding the country code, i.e., 1. Similarly, you can follow the same format while dialing to North American Numbering Plan countries.

If you want to place calls to locations beyond the country code periphery, dialing 011 as a prefix is mandatory. Only then you can dial the respective country code and the national significance number. Canadian numbers can be demonstrated as “ABC-NXX-XXXX.” However, +1ABCXXXXXXX with no spaces, hyphens or other characters is the modern format for Canada’s phone numbers, which are followed globally.

What Are The Different Types of Canadian Phone Number?

As of the present, 47 unique area codes are assigned to specific geographic regions in Canada. There are also two area codes, 600 and 622, reserved for data links and mobile satellite communications.

Canada has adopted the North American Numbering Plan (NANP) used by the United States, eighteen other countries, and island territories in the Caribbean. The Canadian area codes are not allotted based on population; however, the regions with a larger population have a much higher demand for unique area codes. In Canada, the major responsibility for managing area codes is held by the Canadian Numbering Administrator as it is accountable for the assignment of unique area codes. 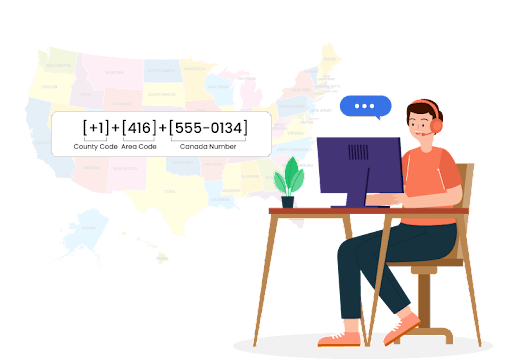 The North American Numbering Plan mandates that phone calls made between participating countries, including Canada, should use country code 1. This needs to be followed by the area code, and then the phone number should be dialed. Hence, this results in a stable dialing pattern of [+1] + [Area Code] + [Canada Phone Number]

How To Get A Canada Virtual Phone Number?

How Can Virtual Mobile Number of

Canada Can Benefit Your Business?

Get Your Canada Virtual Number

Drive your business on global level with virtual number.

Add multiple no. of users as per the needs.

Setup your phone system in less than 3 minutes and start calling.

Get Your Virtual Number Now

Get Your Virtual Number of Canada

Give your business a unique identity by Canada toll free number and local number.

Get Your Very Own Number

Get your Canadian Phone number starting at best price.

Why Use CallHippo For Virtual Number of Canada?

CallHippo is one of the best virtual phone number providers of Canada that allows business owners and entrepreneurs to run their businesses via cell phone and still have all the power of a professional business telephone system. You can even buy Canada Virtual Phone Number From Outside Canada.

CallHippo is essentially a cloud-based virtual phone system that works with your existing phones (office or home). You can select a local number or a toll-free number as your main canada phone number.

Why should you get a Canadian phone number?

These numbers comes with a host of other features besides just making and receiving calls. The voice clarity is par excellence and the support team is available 24×7 to sort out any issues that may arise. CallHippo is one of the best virtual phone number of Canada provider.

How to buy a Virtual Canada Number?

Give your business the boost it needs to achieve the zenith of success by buying Canada virtual phone numbers. Our team will help you set up your call center in less than 3 minutes.

Do I need to integrate virtual mobile number of Canada with CRM?

Yes. The process is very simple. By integrating our calling system, you can make and receive calls from the CRM itself.

Yes, Canadian virtual numbers are absolutely legal all across the country; however, make sure you only use it for legal purposes. At the same time, you must ensure that the Canadian virtual phone number provider you choose or partner with adheres to all federal (CRTC) rules and regulations.

Can I use Canada virtual phone number for SMS?

Yes, you can use a virtual mobile number of Canada to send and receive SMS. The procedure is very similar to regular numbers– draft the SMS, choose a number (for a bulk message, select multiple numbers) from the contact list or enter it manually, and send it to the lead, colleague, or customer.

Who can get Canadian Number?

Any individual or business anywhere in the world can get virtual phone number of canada. The only thing the buyer needs to remember is to use it only for legitimate activities and to follow all local and federal (CRTC) regulations. Also, we recommend that you only buy a Canadian phone number from the best virtual phone number provider like CallHippo.

How much does a Virtual Number of Canada cost?

You can buy Canadian Virtual Phone Number for as low as $6 under CallHippo baisc plan. This comes with basic feature set and will not have features of business use case like team activity tracking, call recording, call monitoring.

How can you get a Free Canada Virtual Phone Number?

You can get Virtual Number of Canada free in CallHippo’ Start up Program. You will get 1 free virtual number for a year and 50 minutes of incoming calls every month. You can also use the free viop number of Canada  can be used  for sms verification